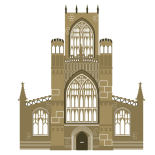 St Mary’s was founded in the second quarter of the twelfth century. There is no surviving written record for the precise date the new stone building was built, but the style of surviving masonry points to sometime between 1120-1150.

This new church was to serve as a chapel of ease to the altar of St Martin at Beverley Minster. It was also around this time that Beverley was growing from a settlement of a few thousand people, to a more substantial town.

The twelfth-century church consisted of a nave, chancel, and central tower. Stone surviving from this original building can be found in various parts of St Mary’s, and most substantially in the inner doorway of the south porch – the archway (and its chevron decoration) is quintessentially twelfth-century.

It is likely that this arch was moved from the south side of the original nave to this new position when aisles were added to the nave in the thirteenth century.