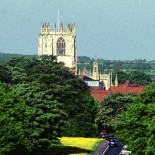 The oval tablet on the exterior of the south side of the chancel of St Mary’s, which can be seen from Ladygate, is known as the ‘Danish soldiers plaque’ (reference number 34664 in the War Memorials Register kept by the Imperial War Museum).

It chronicles a momentous event in the history of the town, pointing to the special part which Beverley and the East Riding played in a turbulent and significant period of British history.

Read about the plaque, and the project to restore it, in the May-June 2020 special edition of the Pilgrim Rabbit, our heritage newsletter, which includes an article by Barbara English & Hanne Hamilton first published in CoScan Magazine, the magazine for the Confederation of Scandinavian Societies in the UK, in June 2019.